An Introduction to SafeMoon Cryptocurrency 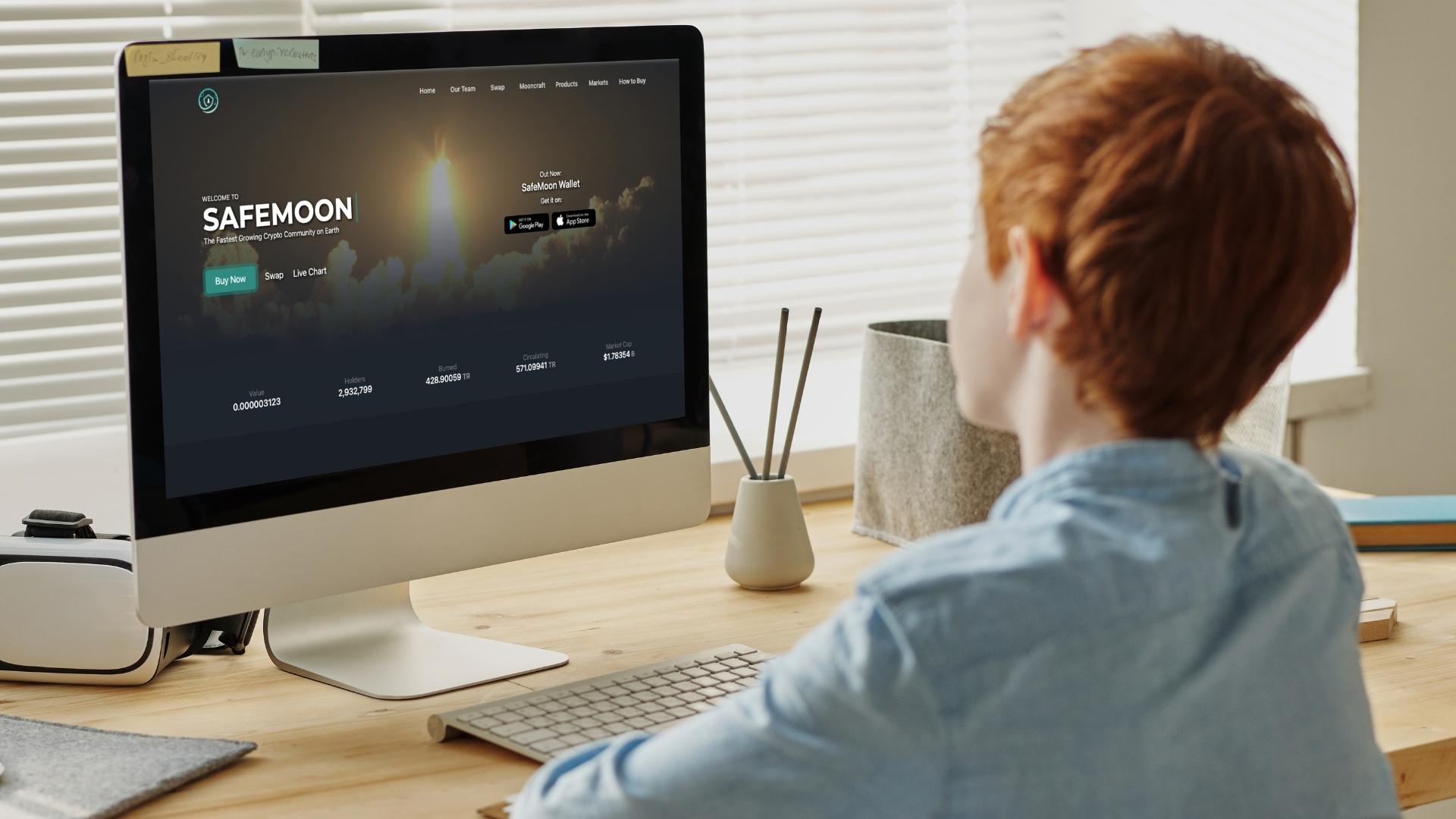 In March 2021, there was a new cryptocurrency introduced called SafeMoon.SafeMoon crypto has started to gain popularity even though it’s relatively new in the market.

Cryptocurrency is continuing to grow as more investors are using it for trading despite its tendency to fluctuate in price.

There are various common types of cryptocurrencies, including Bitcoin, Dogecoin, StopElon, and Ethereum.

In March 2021, there was a new cryptocurrency introduced called SafeMoon.

SafeMoon crypto has started to gain popularity even though it’s relatively new in the market.

It is also the newest cryptocurrency to see a surge in demand since the year began, following that have of Bitcoin, Dogecoin, and Ripple XRP.

With that said, this article discusses this new cryptocurrency in detail, explaining what it is and how to buy it.

What Is SafeMoon Crypto?

The first part of this introduction to SafeMoon cryptocurrency is explaining what it is.

This crypto gets its name from the phrase “safely to the moon.”

Therefore, it promotes itself as a Defi token. The phrase about the moon is not new because Dogecoin introduced it first, but SafeMoon follows in the same footsteps.

SafeMoon cryptocurrency has become popular among people who want to send or spend this currency around the world because it has lower fees and is priced relatively low.

The company has also been convincing new buyers of the cryptocurrency’s validity by allowing them to ask the manufacturers about it.

SafeMoon Is a Decentralized Finance Token

Thus, this is similar to other cryptos such as Bitcoin.

However, unlike other cryptos, SafeMoon is designed to try and fix the price fluctuation of cryptocurrencies.

SafeMoon has a currency price of US$0.000002114 at the time this article was published, according to CoinMarketCap. In addition to that, its market cap is US$2.2 billion.

Moreover, there has been a steady increase in the price of SafeMoon cryptocurrency from the time it was introduced in the market.

The Supply of SafeMoon

SafeMoon does not exchange as intermediaries, leverage financial institutions, and it exists on the blockchain.

Instead, the crypto is designed to promote exchange among peers.

There is also a supply that totals 1 quadrillion SafeMoon tokens, according to the whitepaper that was released.

In addition to that, a total of 223 trillion Burned Dev Tokens were released, creating a total of 1 quadrillion.

The Creator of SafeMoon

John Karony is the CEO of SafeMoon crypto.

Before creating this crypto, he worked at the US Department of Defense as an All-Source Analyst.

In addition to that, the CTO of SafeMoon is Thomas Smith.

He used to work at Goldsmith Blockchain Consulting as the CIO. Jach Haines-Davies is the COO of SafeMoon.

He had worked as a manager at a media company.

SafeMoon has a protocol set in place which discourages day trading of the tokens.

Therefore, this protocol is designed to mend the issue of the price volatility of cryptocurrencies in general.

The Mechanism Behind SafeMoon

Unlike other cryptocurrencies, SafeMoon aims to reward citizens that buy SafeMoon crypto tokens and keep them with themselves instead of trading them with others.

In the case of other cryptocurrencies doing so incurs penalties.

Thus, SafeMoon aims to would charge dealers a penalty tax of 10%.

Therefore, you will be penalized for selling your SafeMoon coins.

On the other hand, SafeMoon would allocate 5% of the revenue that it gets from the penalty fees earned from those selling the coins to various owners of SafeMoon cryptocurrency.

How It Helps Crypto Owners and the Market on the Whole

What this does essentially is rewarding long-term holders of SafeMoon cryptocurrency tokens.

In short, it discourages selling and encourages holding the tokens.

In the long term, this strategy can reduce the price fluctuation because there is an overall decrease in the day trading of crypto.

Typically, high sales of crypt lead to sudden changes in price, which, in turn, can be responsible for a market collapse.

SafeMoon crypto owners will think twice about selling the tokens they have secured.

In addition to that, they will also have an incentive to keep their holdings because it allows them to earn money passively.

SafeMoon Cryptocurrency is also making this a feasible system by keeping Static RFI rewards that are unique from other cryptocurrencies.

It also uses this strategy to create rewards for long-term achievers and holders of SafeMoon cryptocurrency tokens.

Potential Risk of the SafeMoon Mechanism

There is still a risk of the SafeMoon mechanism because the price can only go high if there are many people who buy and hold SafeMoon tokens.

Therefore, many people will have to buy into this strategy for it to work. Until that happens, some users may not see any benefits.

How to Buy SafeMoon

If you’re interested in this cryptocurrency, here’s how to buy SafeMoon.

You can purchase the tokens from Pancakeswap, which is the primary exchange for this cryptocurrency, according to the official website.

The first step that you must make is to make a trusted wallet.

After that, you must use the trusted wallet to convert BNB to a smart chain. Next, add SafeMoon.

You can convert Binance Smart Chain to SafeMoon cryptocurrency through Pancakeswap.

Converting the transaction will ensure that SafeMoon will be present in your wallet.

You can find additional details on buying the SafeMoon tokens on its official website.

What You Should Be Careful When Investing in SafeMoon

SafeMoon definitely has some promising ideas in the world of crypto, especially in regulating a prevalent problem of price volatility.

However, there is a risk of investing in it because it is not regulated in any capacity.

Moreover, because the SafeMoon team owns most of the liquidity, the crypto has also been likened to a Ponzi scheme.

As expected, SafeMoon has officially argued otherwise, claiming that it has provided a roadmap for the rest of this year as clearly as possible.

In due time, SafeMoon aims to create its own exchange.

Until then, it’s exploring Binance and other exchanges and is looking to integrate the cryptocurrency in markets in Africa.

Another reason why many users still have a suspicion about SafeMoon is that there is no clarity if you can actually use it to purchase other things.

There is still no indication of what you can buy with it.

As a result, it causes people to be skeptical about investing in it, which, in turn, will take SafeMoon longer to reach its goal of keeping the price of crypto relatively steady.

SafeMoon May be Competing Against Dogecoin

The strategies, web motto, and popularity increase has shown some similarity with Dogecoin.

Therefore, one could surmise that SafeMoon may be competing against Dogecoin.

However, it caught the attention of Snoop Dogg, the famous rapper, and Elon Musk, a billionaire businessman.

Through their investment, this crypto grew popular and is now one of the top ones in the market.

According to CoinMarketCap, the current price of Dogecoin is US$0.1987 at the time this article was published. There has been an increase of this crypto since the year 2021, in which it grew to even US$0.40.

However, the price has now fallen again.

After reading this introduction to SafeMoon cryptocurrency, it should be clear that it’s still too early to tell whether SafeMoon will, in fact, be beneficial to invest in.

Some users have also claimed that SafeMoon has deviated from its original idea of stabilizing the price of crypto.

Instead, they claim that it has become more focused on becoming an investable commodity.

With that said, it is still arguably the fastest-growing cryptocurrency in the world.

What this shows is that many users believe that it will yield benefits.

Thus, there’s no doubt that the idea of regulating prices of crypto is interesting, as it would benefit many users.

However, the practicality and the execution of such a goal are yet to be determined.

It’s also fair to doubt that at this point because the price of SafeMoon cryptocurrency is just as volatile as other cryptocurrencies in the market.

Therefore, time will tell about what SafeMoon has in store for users.

This post may contain affiliate links, meaning I get a commission if you decide to make a purchase through my links at no cost to you. Please read my disclosure for more info. Clicking any of the links on this website does not increase the cost or affect the price for any item you purchased. Our main purpose is for informational purpose and not for just earning 🙏

Things to avoid while trading crypto

TOP 50 COMMON MISTAKES NEWBIES MAKE THAT CAN BE AVOIDED!

Thank you! Please check your inbox 📩
Oops! Something went wrong while submitting the form.

How to Maximize Your Profits with Cryptocurrencies?

All You Need to Know About BlockFi

What is Blockchain and How is It Related to Cryptocurrency?

Cryptocurrencies, DeFi and Metaverse by TradingView

Things To Avoid When Trading Crypto

A free guide to get you started.

Learn the basics of initial coin offering and getting started with crypto staking.

How Important is Cryptocurrency in Today’s World

Explore Urban Crypto to discover the significance of cryptocurrency in today’s world and benefits of blockchain for business.

If you’re new to cryptocurrency, wallets, and exchanges, you need to check out these common crypto scams to keep your cryptocurrency safe.